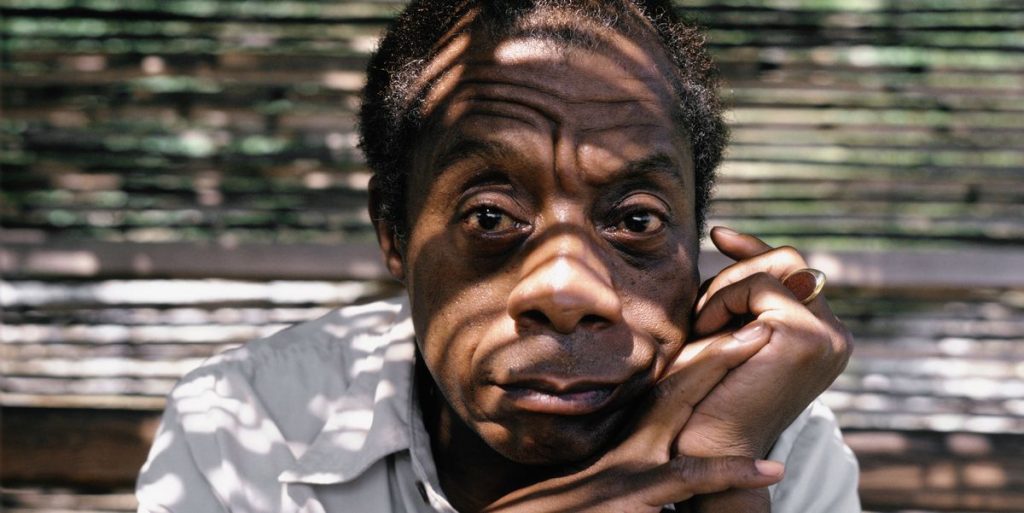 So I’ll admit, until the last few years, I knew very little about James Baldwin. But as I started to get into his books, I realized just how important this man was to our society in the 20th century.

James Baldwin was a prolific and beautiful writer, who was also black and gay. And he was most active from 1947 to his death in 1987, when national issues of race, gender identity, and the like were at the forefront of political turmoil.

His unique perspective gave us some of the most poignant commentary on America and our prejudices.

Another thing I love about him was that he wrote in several mediums. He’s perhaps most famous for his essays that uncovered the underbelly of society. But he also wrote novels, short stories, plays, poems, and even a children’s book called Little Man, Little Man.

In this article, I’ll highlight each of his novels, as well as several of the most important pieces of Baldwin’s other writings. I’ll start each section off with a list of his major works in each area, and then break down what I consider to be the best James Baldwin books in each category.

Let’s get into it.

If you look up other lists of Baldwin’s books, you’ll almost inevitably find each and every one of his novels on the list. So I thought I’d highlight all of them. There are six primary novels written by Baldwin:

Another Country (Vintage International)
$11.99
Check It Out on Amazon!

This book explores interracial relationships, something that was highly frowned on in mainstream society when it was first written, and it features various characters from a wide variety of sexual identities.

Giovanni's Room (Vintage International)
$11.99
Check It Out on Amazon!

3. Go Tell it on the Mountain

Go Tell It on the Mountain (Vintage International)
Check It Out on Amazon!

Go Tell it on the Mountain was a novel written as a semi-biographical story of Baldwin’s life in Harlem. It goes over elements of his life, like living with a highly religious family member, and what that was like when he was trying to find his own identity.

4. If Beale Street Could Talk

If Beale Street Could Talk (Vintage International)
$11.99
Check It Out on Amazon!

This book was eventually adapted into an award-winning film in 2018, and tells the story of a family who have to struggle to keep their love life going when one is accused falsely of rape.

5. Just Above My Head

A story of a gospel singer who, with his family, attempt to make history with the struggles of Black America. It was one of the last books that Baldwin wrote, and definitely one that I recommend. In addition to its moving plot, it’s also known for its openly gay characters.

6. Tell Me How Long the Train’s Been Gone

Tell Me How Long the Train's Been Gone (Vintage International)
Check It Out on Amazon!

Baldwin wrote this based on the life of an actor named Leo Proudhammer who had a heart attack while performing on stage. It covers the choices that led that actor that moment, and is a moving piece of first-person fiction.

Despite his novels being absolutely amazing and thought provoking, it’s probably Baldwin’s essays that are the most memorable.

James Baldwin was highly outspoken on matters of race, interracial relations, gender identity, and income inequality in the United States, and he was brilliantly eloquent in how he expressed these ideas in these essays.

There are a number of essays/essay collections that he wrote, and I’m only going to highlight five. But if you want to know more about them, here is a more complete list:

7. Notes of a Native Son

These ten essays were the first that James Baldwin put together, and they (like most of the essays he would go on to write) tackled the ever-glaring issue of racial inequality in America and Europe. It primarily relates his experiences as a gay African American in a world that had no regard for either identity.

8. Nobody Knows My Name

Nobody Knows My Name (Vintage International)
$11.99
Check It Out on Amazon!

Nobody Knows My Name is a collection of essays that was published in 1961 and was a finalist for the National Book Award in the nonfiction category for the following year. It covers topics of racial associations during the 60s and 70s.

9. No Name in the Street

No Name in the Street (Vintage International)
$11.99
Check It Out on Amazon!

By the early 1970s when this was written, Baldwin had been through a lot, including the death of Martin Luther King Jr. and Malcolm X. During this time Baldwin felt a lot of anger and despair at the situations for any Black American. This is evident in No Name in the Street.

The Devil Finds Work (Vintage International)
$11.99
Check It Out on Amazon!

Movie buffs will find this work enlightening. The Devil Finds Work was a commentary and critique of Hollywood from a racial perspective. It uncovers a lot of the racism inherent in the Hollywood system.

The Fire Next Time (Vintage International)
$11.99
Check It Out on Amazon!

The Fire Next Time is probably the most popular essay collection that Baldwin ever wrote. It has two primary essays that targeted segregation and the role that Christianity had played in Black America.

One of the cools things about James Baldwin is that he dabbled in many different mediums. One of these was theatre. He’s got two prominent plays that I’d like to highlight here:

Blues for Mister Charlie: A Play (Vintage International)
$11.99
Check It Out on Amazon!

Blues for Mister Charlie debuted on freakin’ Broadway in 1964, and told the story of the tragic murder of Emmett Till, a young African-American boy in 1955 before the onset of the Civil Rights Movement, and event that would still have been fresh in contemporary minds.

The Amen Corner: A Play (Vintage International)
$11.99
Check It Out on Amazon!

The Amen Corner was Baldwin’s first play, and it tackled the issues of religion and the effect it has on prejudice and on racial tensions, inspired by Baldwin’s own experiences as a child.

Jimmy's Blues and Other Poems
$12.99
Check It Out on Amazon!

Though not one of the works he was known for, a posthumous collection was published first in 1989. It was called Jimmy’s Blues and Other Poems, and contains several thoughtful insights into the issues that plagued Baldwin during his lifetime. I highly recommend giving them a read.

James Baldwin wrote several short stories/collections of short stories during his lifetime, and I have two to highlight here. But if you’re interested in reading more of his work, feel free to check out the rest.

Going to Meet the Man: Stories (Vintage International)
$11.99
Check It Out on Amazon!

This is actually a collection of short stories that focuses on cultural and racial themes just like most of his other work. It covers a lot of different topics and characters, all with their unique circumstances that really make you think.

Sonny’s Blues is a specific short story that tells the story of a black algebra teacher who is considering his brother’s problems with drug addiction, arrest, and recovery through music. It was eventually republished in the above short story collection Going to Meet the Man.

Lastly, I wanted to cover two publications that didn’t quite fit into the categories above, but definitely deserved a mention.

I Am Not Your Negro: A Companion Edition to the Documentary Film Directed by Raoul Peck (Vintage International)
$10.99
Check It Out on Amazon!

This is an edited collection of various unpublished pieces of Baldwin’s manuscripts and other works. It is meant to represent a book that Baldwin wanted to write, but didn’t have the chance before his death, based on his friends Martin Luther King Jr., Malcolm X, and Medgar Evers. It was also turned into a documentary of the same name.

Little Man, Little Man: A Story of Childhood
$22.95
Check It Out on Amazon!

Believe it or not, James Baldwin even created a children’s book, though this is meant for a slightly more middle-grade audience. It tells the story of a young boy growing up in Harlem, dealing with the joys, but also challenges of growing up with hopes and dreams as a young black child.

James Baldwin is a black person that has had and will have a huge influence on America. The essayist has inspired countless other writers and activists in western society to really reach out and challenge the status quo.

I think those of us that identify as white Americans should take heed and really read if we want to better understand this situation.