5 Best Laptops for Writers and Authors

So, you’ve decided to throw away the old typewriter and enter the 21st century.

Now it’s time for you to start your next novel on a sleek, new machine. But not just any machine… You should opt for one of the best laptops for writers!

But aren’t all keyboards the same? Nope.

What about the screens? Double nope.

There’s actually quite a bit to look for when looking for laptops especially when choosing your next writing platform. But don’t worry, I got you covered. I’ve gone out and done the research on what I find to be the 5 best laptops for authors!

Let’s check it out.

The Best Laptops for Writers

My top pick of the best laptops for writers is the Lenovo ThinkPad X1 Carbon. This Lenovo claims to be an Ultra-No Brainer choice.

Serious words there, Lenovo. But they back every one of them up. It weighs in at just under 2 and a half pounds putting it in contention for the lightest laptop around. And it’s power… Oh boy. It comes available with an 8th Gen Intel Core vPro. Couple that with 16 GB of memory and 1 TB of SSD storage, and you have one heck of a machine. But it isn’t just all muscle. It comes with some awesomely awesome features including:

There’s definitely a reason this PC takes our spot at Numero Uno!

Now this girl, she ain’t a Mac user or Apple fanatic. I had an iPhone 4s back in the day and that was it. (And yep. I had a Zune.) But you got to give credit where credit is due. Apple’s MacBook Air is so awesome, it’s making me thinking twice about buying a Mac. These laptops pride themselves on being the thinnest and lightest full function laptop around (important for a laptop for writers), and the newest model isn’t any different.  But that’s not it, the MacBook Air boasts some seriously luxurious features. It comes equipped with Touch ID–meaning all you need is your fingerprint to unlock it. Or it’s newly revamped backlit keyboard for your darkly lit pleasure. And with up to 16 GB of memory and 1.5 TB of SSD storage, this laptop will be sure to handle any task thrown its way.

3. Microsoft Surface Go (Best for On the Go Writers)

It’s an amazing hybrid that finds its way onto our list of the best laptops for writers.

The Surface Go comes with a ten inch Pixel Sense display that provides touch screen capabilities and touch pen use. Or simply connect the keyboard and it turns into a mini-laptop. Since the case and the keyboard are one in the same, this is an awesome laptop for writers who tend to work away from home. Whether you’re adventure blogging from Cebu or writing that screenplay at your local coffee shop, the Surface Go is perfect for you.

Wrapped neatly inside its Gorilla Glass shell is up to 8 GB of RAM and 128 GB SSD storage. A unique and awesome tablet/laptop experience.

Are you into Yoga? Cause I sure am!

Well, the Lenovo Yoga anyway. This girl can barely touch her toes. But I digress. In our second entry from Lenovo, the Yoga is another one of those unique platforms of the computing world. It’s another hybrid. One part laptop, one part tablet, and all parts awesome.

The Yoga really focuses on its audio and video quality. With the elite models using Dolby Atmos tech and 4k Dolby Vision, the Yoga more than provides an adequate A/V experience. They can also come equipped with fingerprint recognition and Cortana voice commands. But maybe the coolest part is its battery life. The Yoga can last up to 15 hours on a single charge. Now that’s some real power. 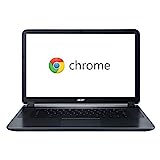 If you’re looking a machine to get the job done on a budget, then the Acer Chromebook is the one for you. It’s lightweight and portable. It has the computing power to get your writing work done. And… it’s substantially cheaper than most options on the market. It runs on a homegrown Google OS which performs well enough as is. However, this Google OS does cause some problems for writers or users. Most of the third-party tools that writers may want to use such as Scrivener and Publisher Rocket do not support Chromebook. There just isn’t a market for it yet. But perhaps with the growing popularity of Chromebook and Google’s OS, changes could be just around the corner.

What to Look for When Buying a New Laptop

Buying a laptop isn’t a decision you should run head first into. It’s a major purchase that requires care and thought. You need to make sure you have enough for your current needs. And maybe some future needs as well. Do you plan on holding video conferences or need webcam capability? Do you plan on using your computer as a hardcore gaming platform or for casual writing? Or are you going to be doing some hardcore writing?

Coordinating your needs should be your first step.

Important Tech Specs for a New Laptop for Writers

Let’s take a look at some of the specifics that  writer would need to analyze prior to purchase.

In our list of the Best Laptops for Writers, there are three different OS’s. Windows. Mac. and Google. But which do you prefer? I’ve clearly stated my love for PC, but many writers actually prefer Mac. Macs are known for their caterings to creative and artistic folk such as authors. They also have exclusive programs for authors such as Vellum! Most writers using Google normally do so because they’ve purchased a Chromebook based on our next reason.

When purchasing a new laptop, you definitely need to consider your budget. Look, here’s a truth bomb. Not all of us writers end up as Stephen King. And some of us can’t necessarily leave our day jobs to pursue writing just yet. But that doesn’t mean you should give up on a new machine. Just be wary of your budget. Now, Chromebooks are generally the least expensive option you’ll find. They’re not terrible and easy on the wallet. But they lack certain luxuries provided by other platforms. Macs, on the other hand, tend to be on the more expensive side of things, but that’s not to say PCs aren’t expensive either. They can definitely get up there. But they also have many more cheaper options than Mac.

If you didn’t think that the keyboard would be a major factor when choosing the best laptops for writers… You might be in the wrong field. Test out the keys before you pick it up. Are they tactile enough? Is there enough vertical space for the keys to travel? Some keyboards have wider sets between individual keys which can be better (or worse) for smaller (or larger hands). Also, if you’re a full-time writer, you don’t want a flimsy keyboard. Trust me. I’ve been through enough keyboards to realize this. Another thing that I made sure my laptop has when it comes to keys is… a backlit keyboard. Seriously, this has come in handy more often than not.

Another thing to check is the touchpad. If you don’t plan on using an external mouse, your touchpad will be your chief way of navigating your screen. Macs are famous for their awesome touchpads and the different commands that can be executed from them. Me… I find them to be too complicated for my taste. I actually prefer to use an external mouse.

What Laptop Should I Get?

Well, I can’t necessarily answer that for you. Everybody has different needs. For example, I have a very heavy hand and spend almost 6 hours a day on my keyboard. So, I needed something that could handle my oafishness. I also needed a backlit keyboard and many plugs for external devices such as a mouse, phone, and others.

I’m also not a fan of Mac. Just my personal preference. I’ve just been using Windows since the DOS days and reuse to head over to the light side of Mac. That’s why I’m on Windows. I also need a heavy graphic card for web design and video editing. So, my setup will probably be worlds apart from a casual writer’s.

But that’s just my two cents. Either way, let me know what setups you’re running in comments below! Love to hear what going on with my fellow writers.