15 Calvin and Hobbes Quotes Everyone Can Relate To

The comic follows the adventures of little Calvin and his stuffed tiger Hobbes. But Hobbes isn't just any tiger.... While other characters that appear in the strip see Hobbes as Calvin's tag-along, Calvin sees Hobbes as a real anthropomorphic tiger--aka his best friend. And their adventures take place all over from fishing trips at the local fishing hole to busting aliens out in space (as Spaceman Spiff).

But there's more to the lovable duo other than just wonderful childhood adventures. They tend to hold wisdom well beyond their years. As a matter of fact, you'll see Calvin and Hobbes quotes all over including schools, libraries, or your local dentist's office. They tend to hit on realities of our world in a wholesome, jovial way that just make you say "Hmmm..."

So without further ado, let's go ahead and thank Mr. Bill Watterson for creating these two timeless characters. Without his creative genius, the following could never have been made possible.

The 15 Best Calvin and Hobbes Quotes In No Particular Order

On Intelligence--or the lack thereof.

Calvin: I'm a genius, but I'm a misunderstood genius.

Hobbes: What's misunderstood about you?

Calvin: Nobody thinks I'm a genius.

On Proper Perception of Self and Pants

Calvin: People think it must be fun to be super genius, but they don’t realize how hard it is to put up with all the idiots in the world.

Hobbes: Isn't your pants zipper supposed to be in the front?

On Just How Small We Are

Calvin: If people sat outside and looked at the stars each night, I'd bet they'd live a lot differently.

Calvin: Well, when you look into infinity, you'll realize that there are more important things than what people do all day.

On Thriving Through Mediocrity

Calvin: I find my life is a lot easier the lower I keep everyone's expectations.

On Getting Your Own Way

Calvin: I thrive on change.

Calvin: I thrive on making other people change.

Calvin: The world bores you when you're cool.

On the Depth of Contemporary Artistry

Calvin: People always make the mistake of thinking art is created for them. But really, art is a private language for sophisticates to congratulate themselves on their superiority to the rest of the world. As my artist’s statement explains, my work is utterly incomprehensible and is therefore full of deep significance.

On Close Encounters of the Third Kind

Calvin: Sometimes I think the surest sign that intelligent life exists elsewhere in the universe is that none of it has tried to contact us.

Calvin: As you can see, I have memorized this utterly useless piece of information long enough to pass a test question. I now intend to forget it forever. You’ve taught me nothing except how to cynically manipulate the system. Congratulations.

On the Boon of Family Thanksgivings

Calvin: I'm related to people I don't relate to.

Calvin: It's not denial. I'm just very selective about the reality I accept.

On the Reality of Growing Up

Calvin: Becoming an adult is probably the dumbest thing you can ever do!

On Zoos and Forgetting to Live in the Moment

Calvin: Look! I caught a butterfly!

Hobbes: If people could put rainbows in zoos, they'd do it.

On Life in General

Calvin: I know, but why isn't it ever unfair in my favor?

On Work and Passion

Hobbes: Won't inventing a robot be more work than making the bed?

Calvin: It's only work if somebody makes you do it.

Love these Calvin and Hobbes Quotes?

After reading these strips, I swear I just wanna curl up in my favorite reading chair with a cozy cup of tea and keep reading. And fortunately, I can! Because I own several print volumes of the Calvin and Hobbes. And if you're interested, you can too!

I honestly don't think that a home is complete without a Calvin and Hobbes book set. They make for excellent gifts for family, friends, college-bound kids, or yourself. And there's so many different versions out there. But the one I recommend the most would be the complete Calvin and Hobbes hardcover box set. It includes every single strip that was ever put into syndication. That's three volumes and 1000s of comics.

So, if you really liked these Calvin and Hobbes quotes, get them all on the Zon! 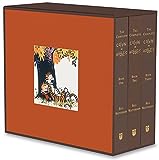 Meet the Man Behind These Calvin and Hobbes Quotes: Bill Watterson

Bill Watterson was born the son of a patent clerk in Washington D.C. However, he didn't really grow up there. His mother insisted the family relocated to a small, quaint town in Ohio in order to be closer to her family. Plus, small town are great for raising kids, right? Either way, it was there he drew his first comic strip. And he never looked back. He dedicated his life to cartooning and developing comic strips.

When it came time for college, he attended and graduated from Kenyon Universty with a Bachelor's in political science. Not that he was going to run for office or anything. Bill just figured that his background in PoliSci could help him get into editorial cartooning. But... after receiving a job at The Cincinnati Post and being subsequently fired... he decided to go into cartooning on his own.

And that's when the magic of Calvin and Hobbes came to life.

Watterson continued the strip all the way up until 1995. And it's then where he determined he had done everything he could for the strip. But while the original Calvin and Hobbes run is finished, the comic has left a mark on American history.